Is mixing business with pleasure ever a good thing? What do you do when you just can’t resist temptation and you cross that line? What do you do when you cross the line with someone you know isn’t good for you long before you cross it? Do you risk it all for a forbidden attraction? Those are questions that Bryn Charles is trying to answer in Bianca Williams’ debut novel Sidelined: The Draft. Here is the synopsis:

When up-and-coming event planner Bryn Charles scores NFL superstar Shane Smith as a client, she thinks she has it made. But with only six weeks to create the “hottest event Baltimore’s ever seen”, she has her work cut out for her. Complicating her efforts is Shane’s determination to score her like one of his touchdowns. In order to stay in the game, she must decide whether she can play by his rules.

Convinced only a fool would date a professional athlete, Bryn ignores his advances—until she wakes up at an impromptu sleepover next to a shirtless Shane. Suddenly the two of them can’t stay apart. Only Bryn doesn’t realize the true complexities of Shane’s life. Caught up in her own desires, she dismisses the warning signs and gives in to a love affair unlike any she’s ever had.

But just when Bryn believes she might have found the love of her life, a blast from Shane’s past causes interference. Now Bryn must decide if she can stay in the game—or if she’s doomed to sit it out on the sideline.

This was such a frustrating read for me, but as soon as I find another book by Bianca Williams I will more than likely read it. Why? Because she is a very talented writer and I will tell you the reasons I feel this way.

First, romance novels are hit or miss with me. This novel is not action-packed or filled with drama, but is more of a character study. The protagonist, Bryn, wasn’t very interesting to me at first, so it took a few chapters for me to really get into the story. She’s an everyday woman, a single mother who is striving for success by co-running an event planning business with her close friend Jen. She’s relatable and her life is pretty dull, much like my own. As I am a single mother who is trying to live her dreams outside of her day job, I had no trouble understanding Bryn and what made her tick. Even without the event planning business, she had done well for herself and her daughter and they lived a good life, as uneventful as it was, which is probably part of what made it good. Or at least it was good until she and her business partner/best friend Jen took on Shane as their client.

Here’s the thing, I could not find one thing likable about Shane. Nothing. Nada. Zilch. Even with the description of his beautifully muscular frame and the relationship he developed with Bryn’s daughter, Shane always rubbed me the wrong way from the second scene he appeared in until the end of the book. It was made clear from the beginning that he was a kid in a grown man’s body, had issues with fidelity, was demanding and selfish. Somehow, despite all of the business-savvy and life experience that Bryn had acquired, she still fell for him. It drove me crazy because in every scene where the thought crossed her mind about becoming romantically involved with Shane I wanted to throw my tablet across the room and scream at her. Even when he softened up and wasn’t as disgusting I still didn’t like him. Why? Because I was Bryn one or twice (don’t judge me) and I already knew how the story would end. I knew Shane, not only by the way the author described him, but because he literally exists. I’ve met him (those characteristics) more often than I’d care to remember. But that’s what makes the book so great. As frustrated as I was reading it, I had to take a step back and remember that this is fiction (inspired by true events). The author did such a good job making the story real, that I forgot that it is fiction.

I’m not sure which parts of the book were true and which were not. It didn’t feel like a memoir. The story is written in present tense, so it made me feel like I was there going through Bryn’s day to day right next to her. The delivery of each sentence was smooth, which made everything flow. Nobody was perfect in this book, which I liked. It was real and despite my frustration with Bryn and Shane’s relationship, I had to regroup and remember that at some point we all have played the fool and ignored the obvious signs. The author left the opportunity for a sequel, so I’ll have to read it, otherwise I won’t be able to sleep at night not knowing what Bryn’s next move is going to be. I give this a 4 out of 5 stars.

Sidelined is available for purchase at Amazon/Kobo/Barnes & Noble 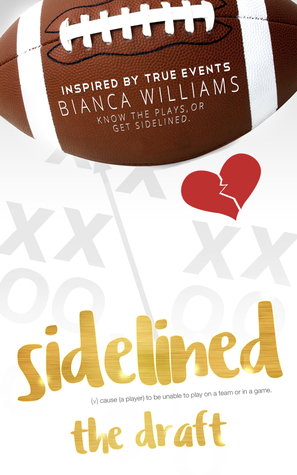 Read more reviews along with my poetry and short stories at http://letarawrites.wordpress.com

﻿There may be affiliate links included in my reviews. What does that mean? If you click on book links I post I may receive a small commission if you make a purchase. This does not cost you anything, but it does help me stay online. Also, all of the opinions I share on this blog are my honest opinions. I do not accept payment for any of my book reviews.
%d bloggers like this: